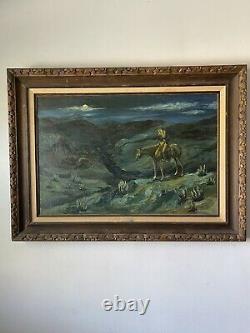 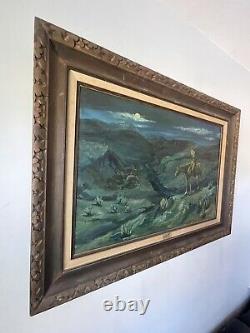 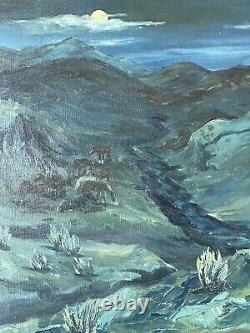 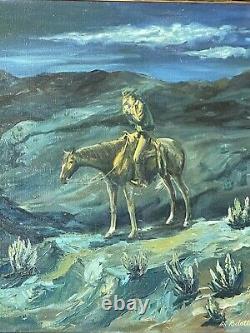 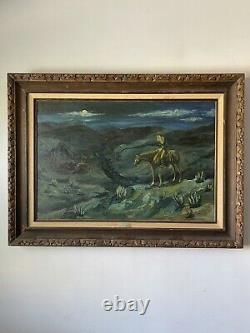 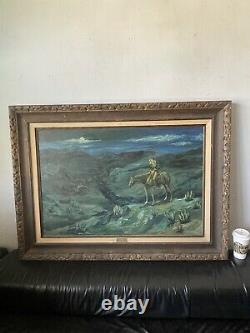 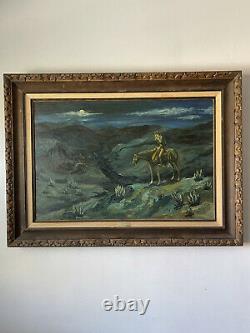 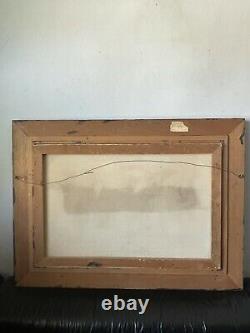 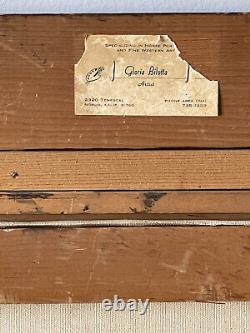 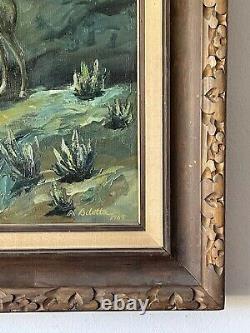 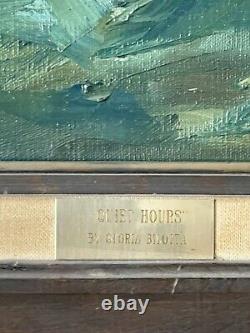 AMAZING ANTIQUE WESTERN OIL PAINTING ON CANVAS BY REVERED CALIFORNIA WESTERN PAINTER GLORIA BILOTTA. THIS WORK IS TITLED "QUIET HOURS" AND DEPICTS A LONE COWBOY SITTING ON HIS HORSE WHILE LIGHTING A CIGARETTE DURING SUNSET.

THIS IS AN OUTSTANDING TONALIST ATMOSPHERIC PAINTING BY THE CELEBRATED FOUNDER AND FIRST PRESIDENT OF WHAT WAS ORIGINALLY KNOWN AS WOMEN ARTISTS OF THE AMERICAN WEST. RETAINS THE ORIGINAL BRASS TITLED TAG. MILD WEAR TO THE FRAME. 34" H x 46" W. Gloria's paintings are becoming widely recognized in many circles for the beauty they exhibit. One of her paintings has a permanent place in the courthouse in Auburn, California. If you read the information below, you will find that she has many other tributes. This painting will be a welcome addition to any fine arts collection of Western Art. Women Artists of the West Organization fast facts - Founded in 1971 in Norco, Calif. Cool resident Gloria Bilotta was its first president - Currently has more than 250 professional woman painters and sculptors as members - Members in 30 U. States and Canada - Bilotta's painting "The Legacy of Placer County" is permanently on display in the Placer County Courthouse in Auburn? ARTIST GLORIA BILOTTA who founded Women Artists of the West is honored by the City of San Diego. COOL City Newspaper article - They thought Gloria Bilotta was dead. As it turned out, the founding member and first president of Women Artists of the West was very much alive and living in the foothills community of Cool, 6 miles East of Auburn.

Bilotta, 76, had learned from a relative that she was listed on the Women Artists website as deceased. She later knew that it was the work of a neighbor prone to playing practical jokes. After contacting the Women Artists group, Bilotta's brush with mortality didn't end with a heartfelt apology and a quick correction on the website. Instead, it turned into an opening to reconnect with an organization she had lost touch with.

She turned her attention from painting to working in the antique business and raising her family. And that opening turned into a visit in early May to see the 44th National Women Artists of the West Art Show at the Women's Museum of California in San Diego. Not only was Bilotta the center of attention when she arrived from Women Artists of the West members who wanted to learn more about the beginnings of their organization, but she also was the recipient of some unexpected honors. San Diego City Council President Todd Gloria presented her with a proclamation declaring May 2 "Gloria Bilotta Day" in San Diego.

What Bilotta discovered was that Women Artists of the West had grown considerably since its formation in the small Southern California community of Norco in 1971. The group started because they were shut out from exhibiting with a Western artist organization. The organization now has 250 members across the nation and in Canada. Bilotta, president for its first five years and now retired from painting, said women artists in 1971 were having a hard time breaking into what was traditionally a man's world of Western-related art.

"The men's artists' association was going great guns, " Bilotta said. But'No women need to apply. As the word got out about the new women's artist organization, Bilotta found that other women were also experiencing the same problems getting their work into galleries.

More than four decades later, with many of the barriers broken down, Bilotta said she was left with satisfaction after visiting the San Diego show and talking with organization officials. The juried exhibit features over 50 works by Women Artists of the West members from throughout the U. "I'm thrilled that the vision we had back then is being carried on, " Bilotta said. Bilotta's husband of 57 years, Joe, said he'd compare the feeling to raising a super-achieving child.