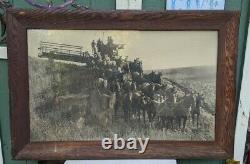 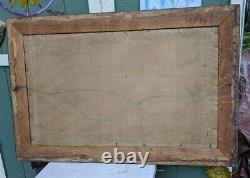 Antique Photogravure Signed Duvall Spokane WA Horse Team Threshing Machine Photo. Please excuse the glare, original photo, frame and glass, circa 1898 1910, overall nice condition couple of holes towards the top, signed in lower right bottom, original label on back made for the Chamber of Commerce of Spokane, this is a rare opportunity to own a piece of history. Photographer's Association of the Pacific Northwest, Programme of Seventh Annual Convention, September 3rd - 6th, 1907, Seattle; n.

(unpaginated) Members Photographic Association of the Pacific Northwest 1907. History of Washington, 1893 C. DuVall, an enterprising citizen of Goldendale, is a product of the progressive spirit of the age, and has done his share in the carrying forward the movement which goes to form a high civilization. Following is a brief outline of his career: He is a native of the State of Missouri, born November 19, 1852. His parents John and Christiana (Powell) DuVall, were natives of Missouri and Iowa, respectively.

In 1853 they crossed the plains with their children, and located in Portland, Oregon; there our subject received his education, and at the age of twenty began the study of photography; he has since devoted himself to the art, and has a studio in the business center of the city of Goldendale where he is prepared to do the most artistic work; he has been established in this place three years, and in that time has gained an enviable reputation. Seeking an investment for the means he had accumulated, Mr.

In March, 1892, he became connected with Henry D. Young in the furniture and undertaking business; they formed a partnership, the firm name being regarded as one of the most substantial corporations of the county. DuVall adheres with great zeal to the principles of the republican party. He has served as clerk of the City Council, and was elected Justice of the Peace in 1890; he was re-elected in 1893, his administration being characterized as just and honorable to a high degree. He is a member of the I.

And belongs to the encampment at Walla Walla. He was united in marriage at The Dalles, Oregon, in 1875, to Miss Sarah J. Worsley, a native of New Jersey. They are the parents of three children: Claudia M.

DuVall was born on November 19, 1851, quoting as a source a genealogical letter from William D. He was the son of John H. This item is in the category "Collectibles\Photographic Images\Photographs". The seller is "iamselling2u" and is located in this country: US. This item can be shipped to United States.