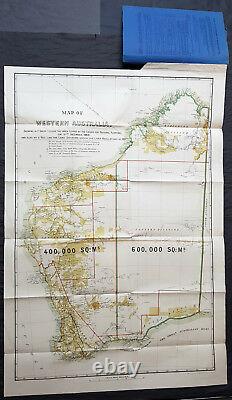 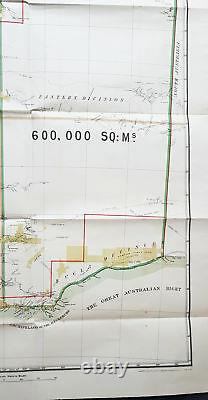 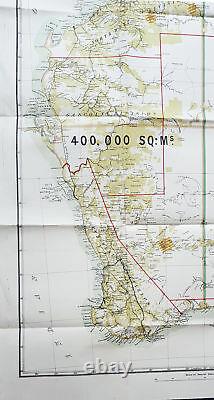 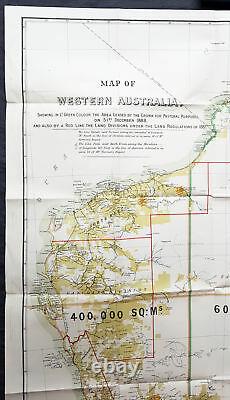 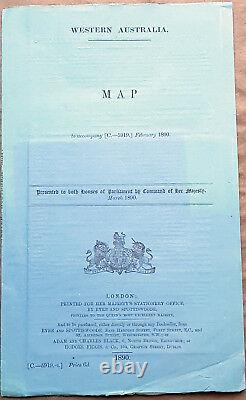 SHOWING IN LT GREEN COLOUR THE AREA LEASED BY THE CROWN FOR PASTORAL PURPOSES ON 31ST DECEMBER 1888. AND ALSO BY A RED LINE THE LAND DIVISION UNDER THE LAND REGULATIONS OF 1887. Forrest, John 1847 - 1918.

Shown in green are the pastoral lease granted by the crown, Land Divisions drawn up for Statute in red lines and the tracks of explorers throughout WA since settlement. This map was intended as a visual reference for the Summary of Land Regulations presented to the Houses of Parliament in 1889 in respect to the proposed introduction of Responsible Government in Western Australia. The map was drawn for the Commissioner of Lands, John Forrest. Covered in blue paper covers with advertisements.

Paper thickness and quality: - Heavy and stable Paper color : - off white Age of map color: - Original Colors used: - Yellow, green, blue, red General color appearance: - Authentic Paper size: - 39in x 27in (980mm x 685mm) Plate size: - 39in x 27in (980mm x 685mm) Margins: - Min 1/2in (12mm). Margins: - None Plate area: - Folds as issued Verso: - None. Background: Western Australia is a state occupying the entire western third of Australia. It is bounded by the Indian Ocean to the north and west, and the Southern Ocean to the south, the Northern Territory to the north-east and South Australia to the south-east. Western Australia is Australias largest state, with a total land area of 2,529,875 square kilometres and the second-largest country subdivision in the world, surpassed only by Russia\'s Sakha Republic. The state has about 2.6 million inhabitants - around 11% of the national total - of whom the vast majority (92%) live in the south-west corner, 73% of the population living in the Perth area, leaving the remainder of the state sparsely populated. The first European visitor to Western Australia was the Dutch explorer Dirk Hartog, who visited the Western Australian coast in 1616. The first European settlement of Western Australia occurred following the landing by Major Edmund Lockyer on 26 December 1826 of an expedition on behalf of the New South Wales colonial government. He established a convict-supported military garrison at King George III Sound, at present-day Albany, and on 21 January 1827 formally took possession of the western third of the continent for the British Crown. This was followed by the establishment of the Swan River Colony in 1829, including the site of the present-day capital, Perth. York was the first inland settlement in Western Australia. Situated 97 kilometres east of Perth, it was settled on 16 September 1831.

Western Australia achieved responsible government in 1890, and federated with the other British colonies in Australia in 1901. Today its economy mainly relies on mining, agriculture and tourism. The state produces 46% of Australia\'s exports.

He pursued a policy of large-scale public works and extensive land settlement, and he helped to ensure that Western Australia joined the federation of Australian states. After federation, he moved to federal politics, where he was at various times postmaster-general, Minister for Defence, Minister for Home Affairs, Treasurer and acting Prime Minister. He was affiliated with the Protectionist Party from 1901 to 1906, the Western Australian Party from 1906 to 1909, the Commonwealth Liberal Party from 1909 to 1917, then the Nationalist Party of Australia from 1917 to 1918. Shortly before his death, Forrest was informed that the King had approved his elevation to the British peerage as Baron Forrest of Bunbury. What is an Antique Map.

The word Antique in the traditional sense refers to an item that is more than a hundred years old. The majority of antique maps for sale today come from books or atlases and have survived due to the protection offered by the hardback covers. The first thing to determine when staring a collection or purchasing an item, is what is important to you. Most collectors prefer to build their collections around a theme.

You may decide to collect maps from one region or country, charting its development through time. Similarly you could collect maps of one particular period in time, by type i. Sea or celestial charts or by cartographer. The collector might also want to consider the theme of cartographical misconceptions such as California as an island or Australia as Terra Australis or the Great Southern Land. The subject is so wide that any would-be-collector has almost endless possibilities to find his own little niche within the field, and thereby build a rewarding collection.

Starting a collection & pricing. Pricing is based on a number of different factors, the most important of which is regional. In any series of maps the most valuable are usually the World Map and the America/North America.

The World because it is usually the most decorative and America because it has the strongest regional market. Other factors that come into play re: price is rarity, age, size, historical importance, decorative value (colour) and overall condition and quality of paper it is printed on. As specialised dealers, we frequently work with first time map buyers who are just starting their collection.

Classical Images was founded 1998 and has built an excellent reputation for supplying high quality original antiquarian maps, historical atlases, antique books and prints. We carry an extensive inventory of antiquarian collectibles from the 15th to 19th century.

Our collection typically includes rare books and decorative antique maps and prints by renowned cartographers, authors and engravers. Specific items not listed may be sourced on request. Classical Images adheres to the Codes of Ethics outlined by the Antiquarian Booksellers Association of America (ABAA). We are a primarily an online based enterprise, however our inventory may be viewed by appointment. This item is in the category "Antiques\Maps, Atlases & Globes\Australia/Oceania Maps".

The seller is "searching01" and is located in this country: AU. This item can be shipped worldwide.