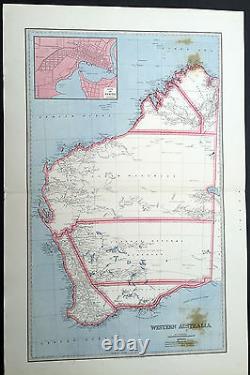 Company Details - About ME. Western Australia divided into 6 districts and an inset map of the City of Perth was engraved by Alex J Scally and was published in the extremely significant Australian & New Zealand publication. The Picturesque Atlas of Australasia. Cludes an index to the map on the verso giving names and locations of places on the map. These maps were some of the best maps published at the time in the "Modern" look. The colour is bright, the engraving extremely fine and the paper heavy and stable. Was published in Sydney between 1886-88.

Many of its over 700 wood-engraved illustrations were specially commissioned works by leading Australian artists. It was released in 42 separate editions usually bound into. Its publication was one of the most significant cultural projects in nineteenth-century Australia.

Writers, artists, academics and politicians came together to prepare a book of unprecedented grandeur and ambition, and a publishing company was established to produce and publish it. The seven hundred engravings on steel and wood contained in the Picturesque Atlas were among the finest engravings to be found anywhere in the world at this time. The Atlas was a collegial project, staffed by a large number of artists and garnering an unusual number of contributors for one work. Lightly supervised by the former Sydney Morning Herald editor Andrew Garran it was lavishly produced at the Wynyard Square headquarters of the Atlas company. It had the services of the Melburnian journalist and public figure James Smith who wrote much of the Victorian and Tasmanian material, and W.

Traill wrote extensively about Queensland. It was not, of course, an Atlas is the usual sense of the word, maps playing a comparatively minor role. But use of Atlas in the title, Hughes-d'Aeth notes, gave a sense of the scale of the publication both in terms of comprehensiveness and format. As the author points out, calling it an Atlas carries a promise of the exactitude of the relationship between the subject and its representation, and also bears a sense of the acquisitiveness that shadows the imperial phase of cartography. There were only thirty maps in the Atlas's 800 pages, but there were hundreds of pictures.

This is where much of the ideological work of the Atlas was completed and this is where Paper Nation concentrates its analysis. Its first task is to unravel the linguistic ball of string that is the word'picturesque'. Though Humphrey Repton and Uvedale Price had their opinions, Hughes-d'Aeth is quite right to pick William Gilpin out of the line-up of suspicious aesthetes, for it was he who really popularised the idea of travelling in search of picturesque views. Paper Nation's dissection of the term picturesque is particularly aware of the term's adaptation to colonial usage, and its mutations through time.

The picturesque took on an increasingly acquisitive edge, as admiration of the beauty of the land was joined by a concern to exploit it. A'deep reverence for production' can be seen in the Picturesque Atlas's many illustrations of mines, factories and agricultural processes. The slag heaps of a mine were now as'picturesque' as a fern-filled valley, but this does mean that the term was evacuated of all meaning. Rather the aesthetic appropriation of the land and its material exploitation were part of a continuum of colonial attitudes, and it was the duty of the Picturesque Atlas to affirm and re-affirm the rightness of European habitation and progress.

Please note all items auctioned are genuine, we do not sell reproductions. A Certificate of Authenticity (COA) can be issued on request. General Description: Paper thickness and quality: - Light & stable Paper color: - White Age of map color. M Margins: - Min 1in. Light browning to top and bottom of image.

EMS courier will take 3-5 days. Classical Images was founded 1998 and has built an excellent reputation for supplying high quality original antiquarian works on paper at affordable prices. We carry an extensive inventory of antiquarian collectibles from the 15th to 19th century, a period that produced achievements by some of history s finest explorers, scientists and artists. Classical Images adheres to the Codes of Ethics outlined by the Antiquarian Booksellers Association of America (ABAA). We are enthusiastic collectors ourselves of Antiquarian treasures and are happy to share our knowledge, discuss issues and provide information and assistance, both in general and about items we offer for sale.

Thank you Simon & Andrea Mayers. Since purchasing online does not give the opportunity to examine our merchandise directly we strive to give you as much information as possible in the description, condition report and images supplied for each item. We value our customers highly and will make every effort to satisfy all issues that arise. This item is in the category "Antiques\Maps, Atlases & Globes\Australia/Oceania Maps". The seller is "searching01" and is located in this country: AU.