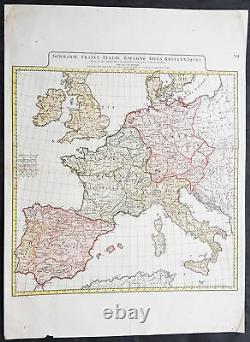 Margins: - None Plate area: - Vertical & horizontal folds Verso: - None. Background: The Roman Empire was the post-Roman Republic period of the ancient Roman civilization, with a government headed by emperors and large territorial holdings around the Mediterranean Sea in Europe, Africa and Asia. The city of Rome was the largest city in the world c.

AD 400, with Constantinople (New Rome) becoming the largest around AD 500, and the Empire\'s population grew to an estimated 50 to 90 million inhabitants (roughly 20% of the world\'s population at the time) The 500-year-old republic which preceded it had been severely destabilized in a series of civil wars and political conflict, during which Julius Caesar was appointed as perpetual dictator and then assassinated in 44 BC. Civil wars and executions continued, culminating in the victory of Octavian, Caesar\'s adopted son, over Mark Antony and Cleopatra at the Battle of Actium in 31 BC and the annexation of Egypt. Octavian\'s power was then unassailable and in 27 BC the Roman Senate formally granted him overarching power and the new title Augustus, effectively marking the end of the Roman Republic.

He is said to have designed his first map at the age of fifteen and in a long and active life he produced a great number of elegantly engraved maps, noted for their scholarship and accuracy. If anything, he was even more critical of the work of his predecessors than Delisle and his exacting standards soon brought him international recognition as the finest cartographer of his time. In fact, during his whole life he never travelled outside Paris but he built up a vast collection of cartographic material which eventually was passed to the Bibliotheque Nationale. He was specially interested in the geography of the East and he designed maps for a Description geographique de Ia Chine by Pere J. Du Halde (1735), a notable work of the day based on surveys and reports of Jesuit missionaries.

These maps were also issued in Nouvel Atlas de Ia Chine in 1737 and were the first to give a reasonably accurate picture of that remote land. From about 1740 onwards he published collections of maps under the title Atlas Generate which went through numerous expanding editions in various languages; English editions were printed by Robert Sayer, Laurie and Whittle, and others into the next century.

Please note all items auctioned are genuine, we do not sell reproductions. A Certificate of Authenticity (COA) can be issued on request. What is an Antique Map.

The word Antique in the traditional sense refers to an item that is more than a hundred years old. The majority of antique maps for sale today come from books or atlases and have survived due to the protection offered by the hardback covers.

The first thing to determine when staring a collection or purchasing an item, is what is important to you. Most collectors prefer to build their collections around a theme. You may decide to collect maps from one region or country, charting its development through time. Similarly you could collect maps of one particular period in time, by type i. Sea or celestial charts or by cartographer. The collector might also want to consider the theme of cartographical misconceptions such as California as an island or Australia as Terra Australis or the Great Southern Land. The subject is so wide that any would-be-collector has almost endless possibilities to find his own little niche within the field, and thereby build a rewarding collection.

Starting a collection & pricing. Pricing is based on a number of different factors, the most important of which is regional. In any series of maps the most valuable are usually the World Map and the America/North America. The World because it is usually the most decorative and America because it has the strongest regional market.

Other factors that come into play re: price is rarity, age, size, historical importance, decorative value (colour) and overall condition and quality of paper it is printed on. As specialised dealers, we frequently work with first time map buyers who are just starting their collection. Classical Images was founded 1998 and has built an excellent reputation for supplying high quality original antiquarian maps, historical atlases, antique books and prints. We carry an extensive inventory of antiquarian collectibles from the 15th to 19th century. Our collection typically includes rare books and decorative antique maps and prints by renowned cartographers, authors and engravers. Specific items not listed may be sourced on request. Classical Images adheres to the Codes of Ethics outlined by the Antiquarian Booksellers Association of America (ABAA). We are a primarily an online based enterprise, however our inventory may be viewed by appointment. This item is in the category "Antiques\Maps, Atlases & Globes\Europe Maps".

The seller is "searching01" and is located in this country: AU. This item can be shipped worldwide.